I return to Bellefont-Belcier to resume the tasting of the Grand Cercle wines.
After three hours of circumvolutions from one appellation to the other, the contours of the vintage begin to show. This is how we apprehend reality: in order to unify consciousness, we like to create categories and define styles (thank you Kant!); so, let us lay some stylistic benchmarks and let us confuse consciences slightly. 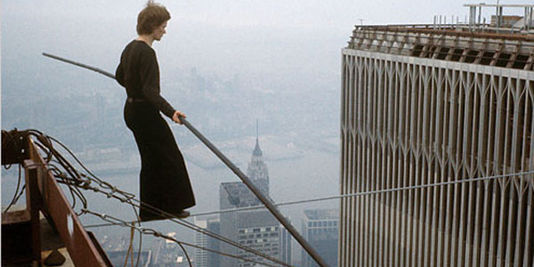 At their best, the aesthetics of some 2013 Bordeaux wines resembles those of Burgundies! These are wines based on texture rather than structure; they offer pure aromas (without vegetal notes), they are moderately intense, with expressions of red fruits and floral notes. Such a vintage, limited in its maturity, needed much dexterity and movements worthy of a bayadère dancer to find its balance; infusion rather than extraction, stretching rather than tightening.
Tightrope acts rather than loud blockbusters; so much the better.
It was no wonder that the hyperactive Bruno Borie de Ducru-Beaucaillou quoted a song by the Pointers Sisters to describe the melody of the grapes: “I want a man with a slow hand / I want a lover with an easy touch”. 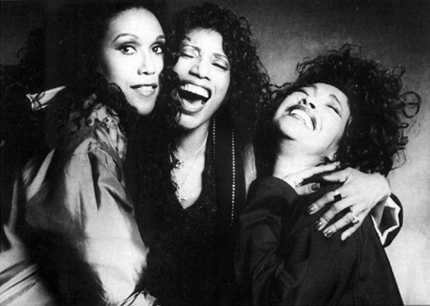 The Pointer Sisters, a man with a slow hand

What do we find in the middle, half-way between the ideal and the facts? Some wines are organoleptically correct, without vices or virtues; linear, bland personalities, well-polished in their woody livery; however, one guesses that a mere puff might be enough to tip them over a steep slope.
At the bottom, on the way that is paved with good intentions, what do we find? Later; let’s get to that later… 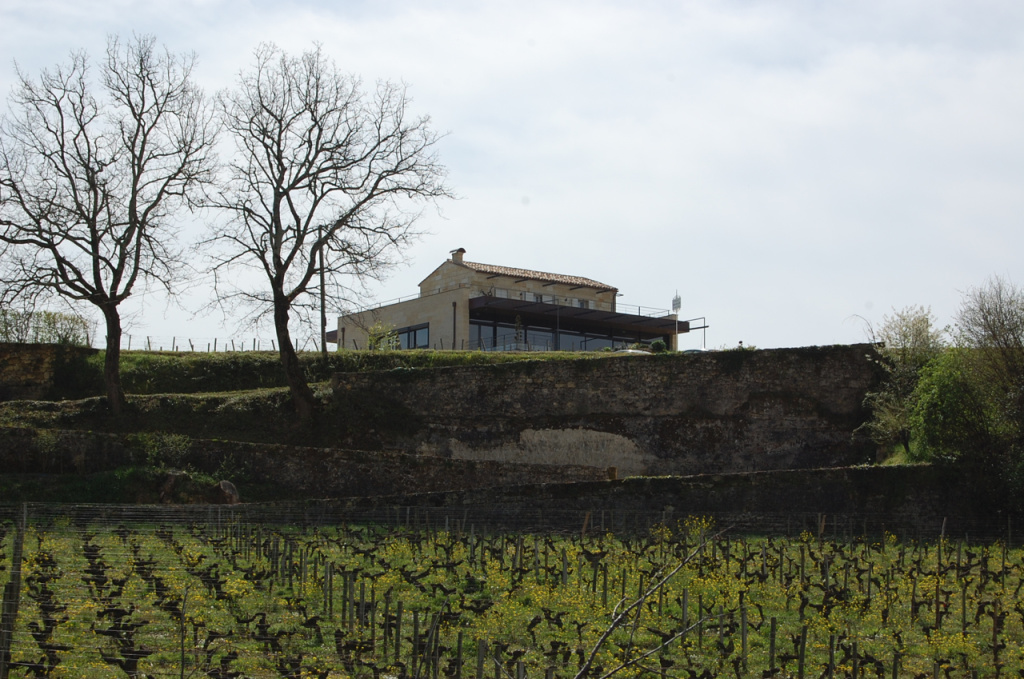 Next up: tasting in Pavie-Macquin, followed by a philosophical lunch with Nicolas Thienpont and his team.
I take advantage of this to get to know Antonio Galloni better; I had met him briefly at the Villa d’Este. He had been reported to be Parker’s successor; he now steers his own ship at www.vinousmedia.com.
It is clear that Galloni takes the time to evaluate the samples thoroughly; he is not one to give in to the Stakhanovism of hyperactive wine tasters.
The beef cooked on vine shoots was paired with highly pleasurable wines: 2006 Larcis-Ducasse, 1998 Berliquet, fine and lean, 2002 Pavie-Macquin, 2004 Pavie-Macquin, 1999 and 2000 Pavie-Macquin (one of the vintage’s successes). 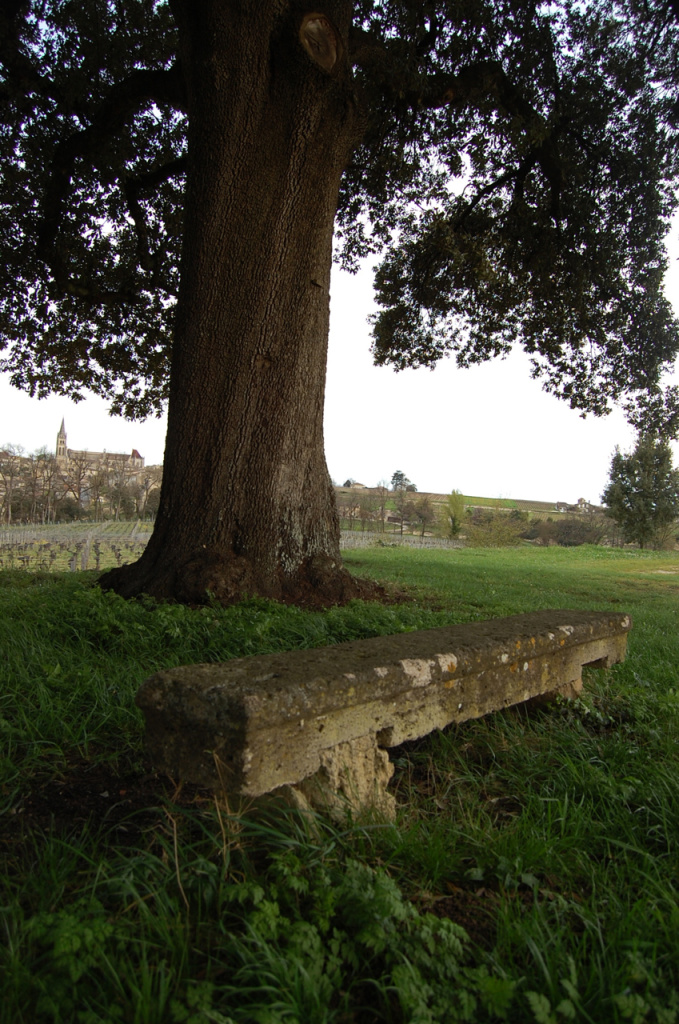 The Pavie-Macquin oak tree and its bench

After spending a moment to meditate under the oak trees of Pavie-Macquin, it is time to move on. The sampling tables have been laid at the entrance to the warehouse at Château Le Gay. A few tasters are going through the basics under a hesitant sunshine.
This is followed by the tasting of La Grappe led by Stéphane Derenoncourt and his team. As usual, this takes place at La Gaffelière. The German shepherds at the gate have not stood guard for a long time. They merely give a mocking stare: they have seen innumerable tasters. This tasting is one of the main moments that allow tasters to determine the value of a vintage; because of the diversity of the estates in attendance, and the reliability and precision of the technical information provided.
Several great bottles are present. I particularly like Canon-Pécresse, Lucia, Clos Fourtet, Domaine de Chevalier rouge, les Carmes Haut-Brion, Talbot, Petit Village. 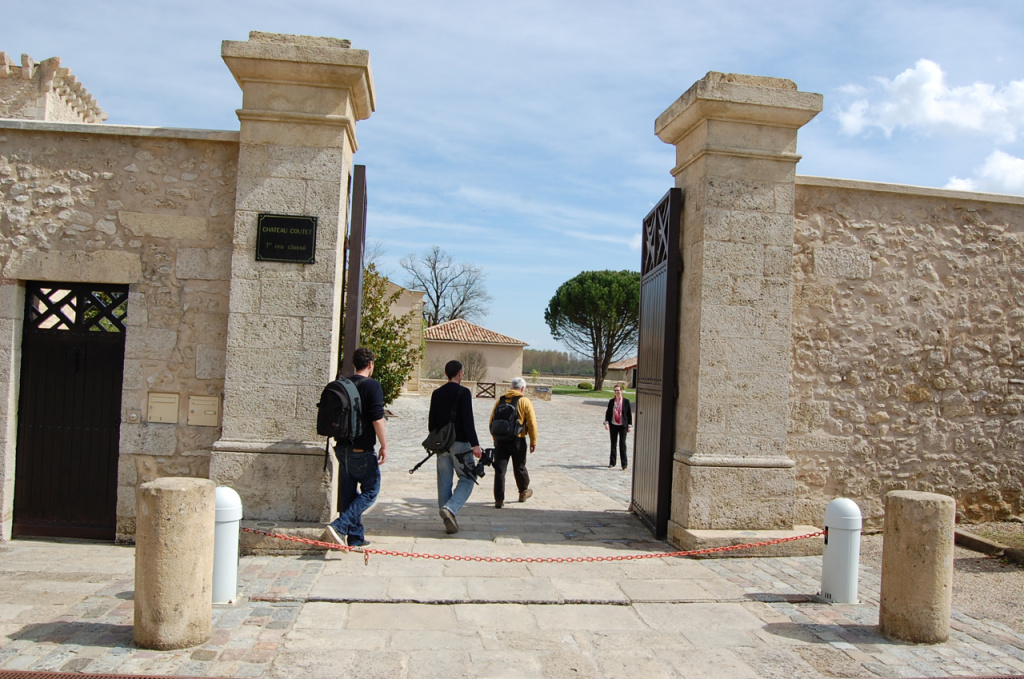 I meet with Alessandro Masnaghetti, of Enogea, again. He is accompanied by photographer Antonio Cavallini and director Sergej Grugr; there are making a film on the primeurs in Bordeaux. For the first time I find myself with a film crew during the Primeurs Week, and I will have a great time.
The last stop of the day is Hostellerie Plaisance; Chantal and Gérard Perse receive journalists and guests to present the wines of their estates; this is followed by the traditional dinner of the ban des primeurs, just before the official opening dinner which will take place tomorrow in Pavie.
The evening is also a major test for new chef Cédric Béchade (of L’Auberge basque); he has the difficult task of succeeding media star Etchebest. 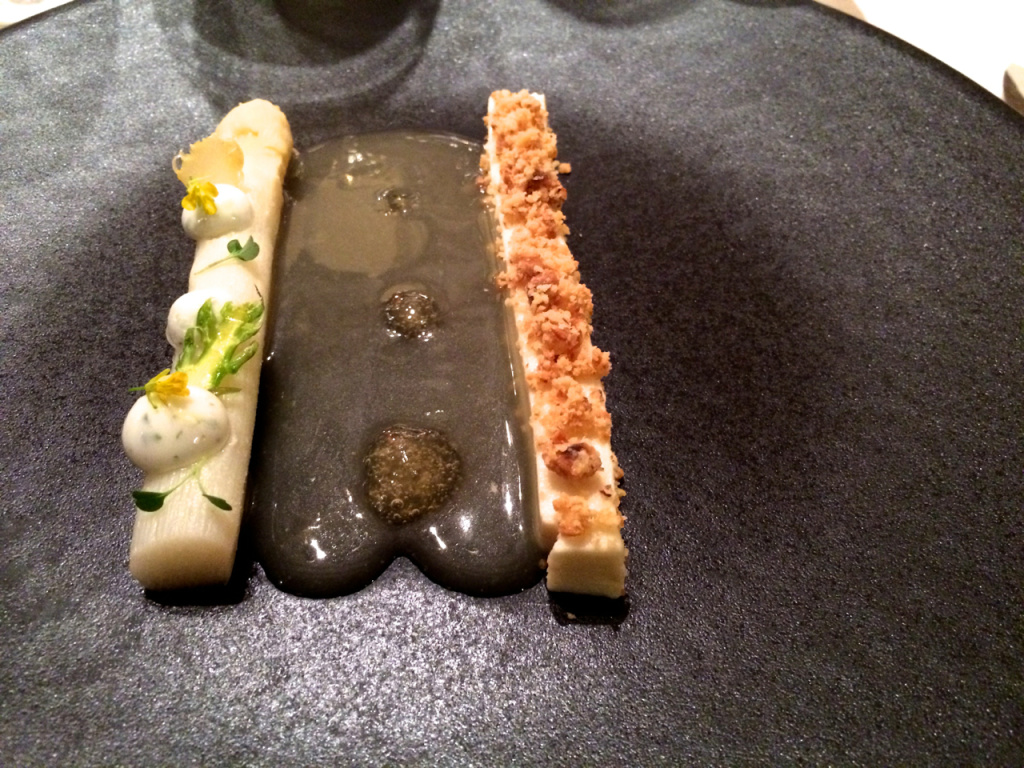 After a poached egg with cauliflower and almonds, and an Iberian ham croustade, the menu takes on strength with white asparagus from the South-West steamed with Sauternes, croustillant of hazelnuts and citrus thyme. The white 2010 Montbusquet, woody, does not fully agree with the dish. I enjoyed the following dish especially: sea bass de Ligne with delicate escargots insertions, jus “Esprit de Pavie”, broad beans and morels.

This was the moment chosen by a well-known English taster, who was sitting next to me, who announced for the third time that he needed to filer à l’anglaise before the end of the dinner as he had a very heavy programme the following day.
Who is he? The Daily Telegraph describes him as “authoritative and witty and pitching it just right. He even rounds off proceedings by bursting into song”.
– May I ask you a question, Mr Taster-in-a-hurry, how do you say ‘filer à l’anglaise’ in English?
– In English we say ‘to take French leave’…
After a moment of reflection, he added:
– Actually we don’t take a French leave when we are in England. We only do it when we are in France…
Thus the British star disappeared right after this double marvel: roasted duck of Chalans Gérard Burgaud, carrots flavoured with citrus flower leaf, chickpeas and green curry, escorted by an imperious 1998 Pavie still somewhat in its gangue.
Monsieur and Madame Perse need not worry: Cédric Bécharde (trained by Ducasse) is a good, a very good chef who will go far. 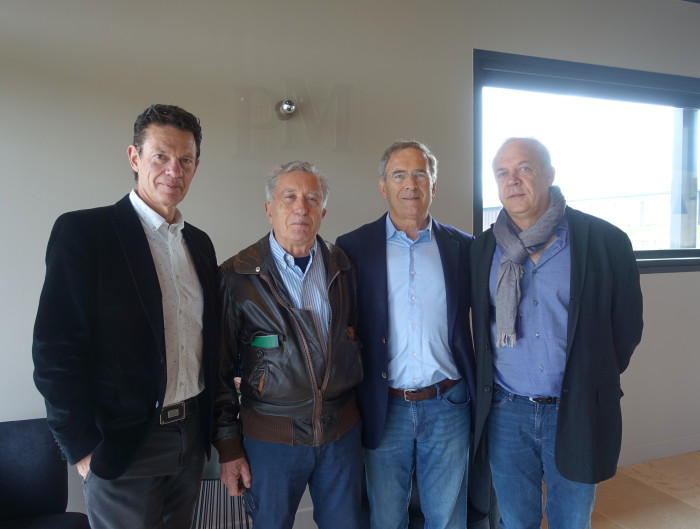 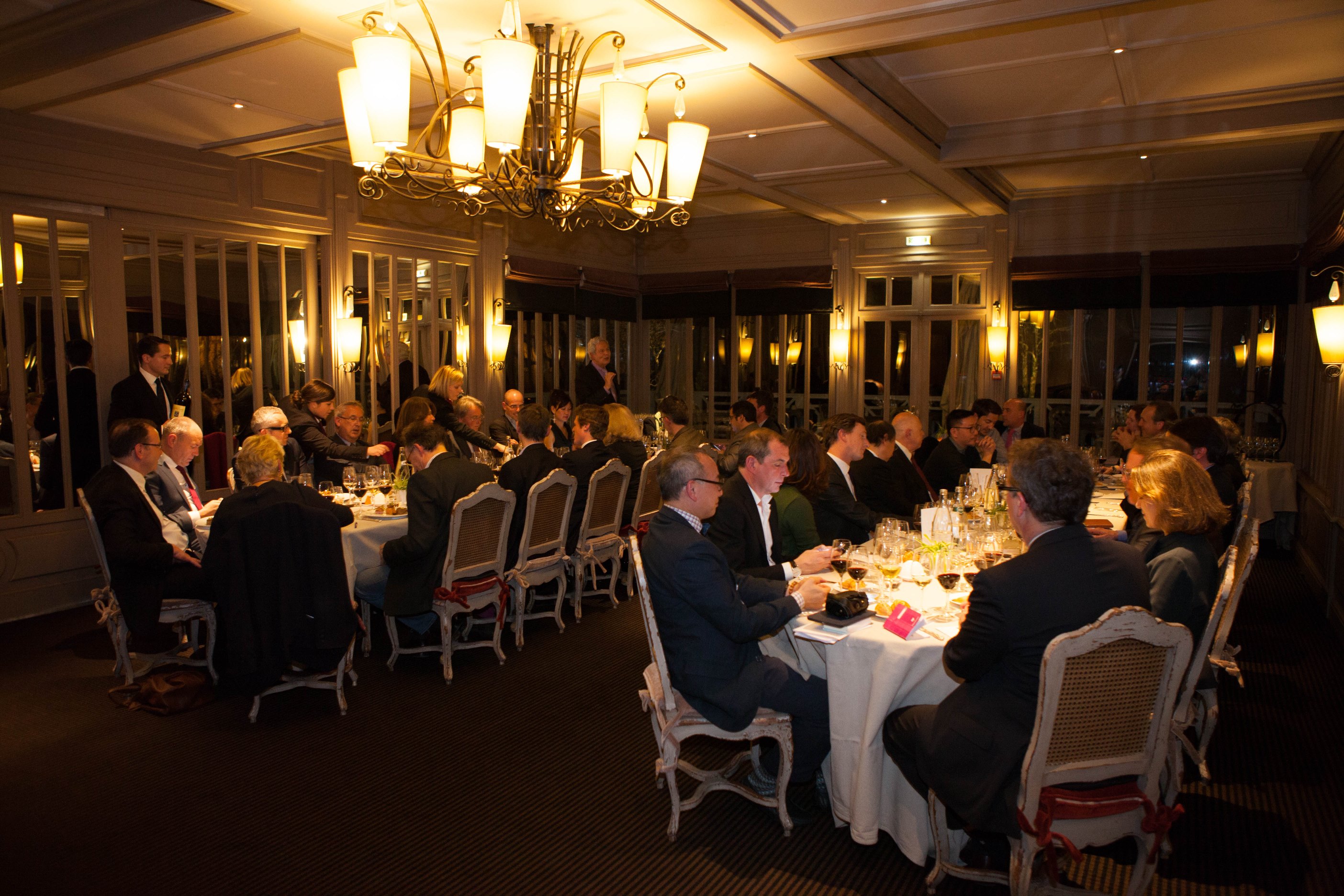 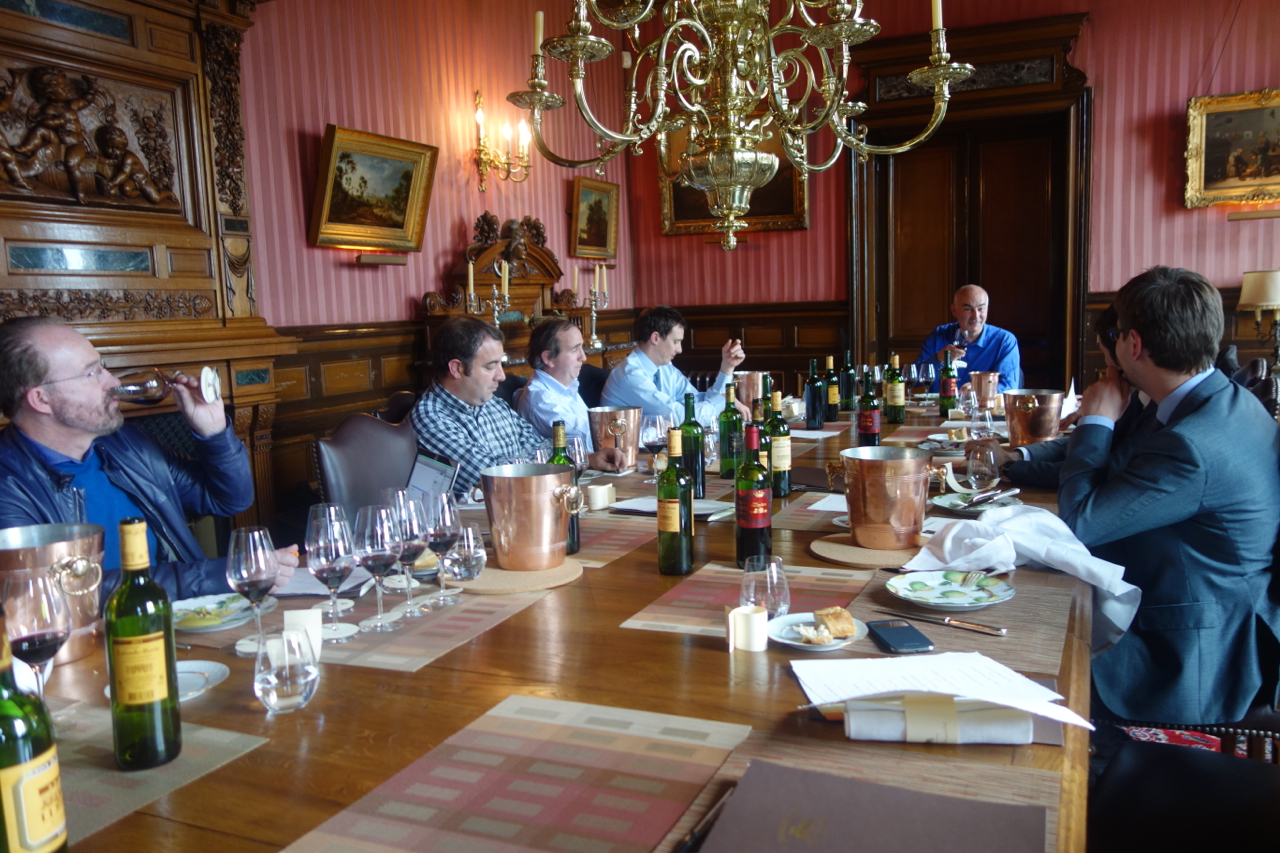 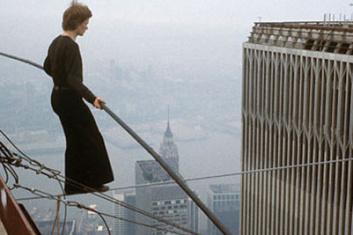