Bordeaux 2010, a transcendent Yquem and that’s all !

But now let's escape a moment from this symphony, these magic spells, to taste the newborn Yquem 2010. A conversation with Francis Mayeur, the château's technical director:

“2010 is not a hot year”, he specifies. “The total of temperatures is right in the average. In mid-June we had a lot of moisture at the moment of floraison which led to coulure. And then, from June 20 to the 5th of September we had 80 days with only 3 days of rain, the 6, 7, and 8 September. Those rains brought the botrytis.”

“The big difference between 2009 and 2010 is the harvest conditions. In September and October 2009 it was very hot whereas the same period in 2010 was cooler than average. So we had extremely cool harvest conditions in 2010. We made the first trie at Yquem on the 20th and 21st of September. Then, after a few drops of rain we continued with a second trie the 27th to the 30th. On the 4th and the 10th of October we had 22 and 28 mm of rain which sparked the botrytis again. All the vineyards were covered with noble rot.”

“Thanks to this, the 14-18 October we brought in a marvellous third trie. On the 19th we wagered by stopping the harvest to wait. We started again on the 22-23. Then from the 26-30 October the fourth trie but at this time the harvest started showing signs of damage…The last trie was the 4th and 5th of November but this one doesn't go into the assemblage.” 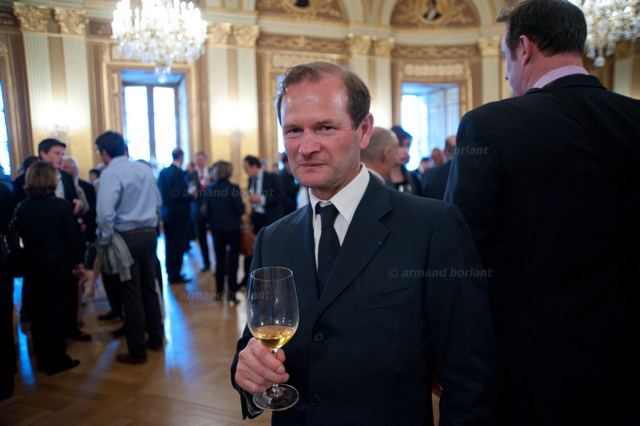 Pierre Lurton, directeur d'Yquem – photo Armand Borlant.
Here the 2010 is an opulent vintage with a large yield: 20 hl/ha, but less than 10 hl/ha in finished wine! The pitfall to avoid: if we only cared about sugar levels we might be tempted to mix parcels which are very different. We separated the different terroirs. We divided the harvest days in a way to create a qualitative scale in that ocean of harvesting. Twenty years ago, if we had had a similar year we wouldn't have been able to do this kind of haute couture. Today, with what we know about each parcel and with a team of 200 pickers,  we can. In the chai at this moment we have over 50 different lots. 2010 is a very classic year. We're at 13.55% alcohol with 141 grams of residual sugar and a ph of 3.8. The assemblage contains only 13% Sauvignon this year for 87% Semillon. We've chosen the lots for cleanness and length, giving priority to freshness and brilliance. There were some risks of bitterness this year, even in the third trie, so we had to be very careful. We've chosen to present the 2010 in parallel with the 1988 which, according to our data and also on the sensory level, seems closest to 2010.”

The tasting of Yquem 2010, away from murmur and song: purity, elegance, aromatic refinement and crystal clarity, tense and dynamic in spite of the richness in sugar which is imperceptible. A sublime wine. At least as good as the 2009, and since that was already perfection what adjective can I invent? As for the 1988, I didn't taste a single drop. Frustration. I spoke for a long while with Francis Mayeur and when I went up to the buffet everything was gone, it was over before it began…

What did I listen to while driving back towards Pauillac? Silence? A chorus of angels? No: Handel's suite volume 2, number 1 played on the piano by Racha Arodaki. 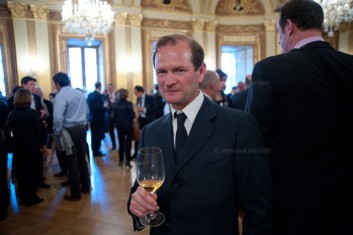 Bordeaux 2010, a transcendent Yquem and that’s all !